This Saturday Houston's own The Suffers will be headlining The Big Bash, a celebration commemorating the inauguration of Art Blocks at Main Street Square in Downtown Houston.

Art Blocks Houston is an effort by the Houston Downtown Management District to further activate and utilize the area of Main Street between Dallas Street and Walker Street through the installation of public art. The Downtown District notes that "From lessons learned about public art's capacity to awaken change in areas that have not yet realized their full potential, Art Blocks strives to enliven Main Street Square." A number of art selections have been placed along Main Street, which also recently saw physical improvements to its streetscape (As did Dallas Street.)

Main Street Square was completed in 2004 in conjunction with the opening of Houston's Red Line light rail. In 2004, Chicago Tribune architecture critic Blair Kamin visited Houston near the time that the city was hosting the Super Bowl. He noted the contrast of Houston's development in 2004 compared to that of the oil boom in the 1980's. A portion of Kamin's review includes an emphasis on public spaces, and a mention of Main Street Square, Houston's pedestrian mall. Kamin notes that "Of course, lots of pedestrian malls, like the one on State Street that Chicago got rid of in the mid-1990s, have flopped. Yet this one may have a happier fate." Kamin goes on to say that "Of course, one vibrant pedestrian mall will not make Houston a Paris on the prairie." But, the rest of his review, which consisted of commentary surrounding Houston's then-recently-opened light rail, was complementary.

As noted in the summer 2004 edition of the Rice Design Alliance's Cite magazine, Main Street Square is a small remnant of the Making Main Street Happen design competition that led designers Ehrenkrantz, Eckstut & Kuhn to create a master plan for Main Street. (A 1999 Cite article gives even more information behind Houston's Main Street Coalition and Main Street design). Ehrenkrantz, Eckstut & Kuhn might be best known for their design of New York City's Battery Park City. A 2000 Main Street Coalition Strategic Plan for the area re-emphasizes the desire and recognition of public art in maintaining vibrant public spaces, especially one that lies within the geographic center of Downtown Houston. 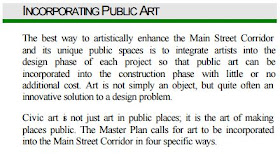 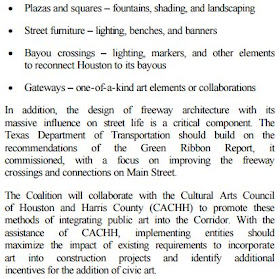 As many Houstonians know, there are many parts of Downtown Houston that are alive during the 9 to 5 workday, then seemingly become desolate. Main Street is becoming increasingly busy with the addition of new bars and restaurants, but this is primarily north of Main Street Square, whose blocks become a bit desolate as evening sets. Some of this can be attributed to the fact that a number of the blockfaces contain buildings without any active public spaces, or without retail that is open after the work day.

Given its somewhat desolate nature at night, Main Street Square has also been home to a number of people loitering, further keeping people away from its pedestrian plaza. The blocks between Dallas Street and McKinney Street have little to attract anyone to it, aside from a few ledges which to sit. The only retail spaces are Corner Bakery Cafe that sits at the corner of McKinney and Main Street, and is open weekdays from 6:30 AM to 4 PM, and the Main Food Store. The result, a fairly isolated landscape outside of the business day.

Back to the topic of Art Blocks; The Downtown District further provides that "Pop up performances, interactive experiences and community festivals will add to a schedule of events that complements the spirit of the major public art commissions." This is important, as many successful public spaces rely on something to attract people to them, usually programming and activities. This is known as triangulation.

William Whyte's The Social Life of Small Urban Spaces addresses this issue, providing that triangulation is one of the effective ingredients for a successful, social public space. Triangulation brings the passerby into a space. It connects people to places. That is what Art Blocks aims to do.

As I mentioned in a previous post looking at the design of Houston Center, we've looked to our bayous as conduits of activity and vitality. We're rightfully restoring them, attracting a variety of users. William Whyte would also contend that the same should be applied to city streets. He says, "The street is the river of life of the city. They come to these places not to escape it, but to partake of it."

So Houston, get out and enjoy your streets, enjoy some art, and enjoy your public places. Let's hope that this is another example to prove Kamin's 2004 hunch; that Houston's public places can continue to become the places they were envisioned to be.